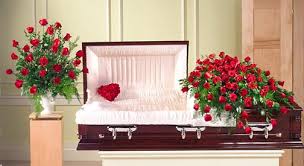 Listening to the radio on the drive home one afternoon, I caught a snippet of a woman speaking to a group about a topic I couldn’t make out. What got my attention was a three-word phrase she used: “cold, hard, empty.”

Those words immediately took me back to a conversation I’d had with my daughter on a drive. Somehow we got talking about the dead which led to laughing about theatrical displays at open coffins.

(We laugh about almost anything!) If I go before her, she promised an award-winning performance to get me laughing from heaven.

If open casket drama is unfamiliar, you probably did not grow up in the South in a black church, as I did.

Funerals in Alabama are a scripted production that begins with the body being properly dressed and laid out in a funeral home parlor, the odor of perfumed formaldehyde hanging heavy in the air and permeating everything, including the roomful of cut-flower arrangements.

Done right, this display provokes the obligatory response: “Doesn’t he or she look ‘natural’?” or “Didn’t they put him or her away ‘nice’?”

This is where the radio remark comes in: Dead people do not look “natural.” They do not look “nice.” They look, well, dead: Cold, Hard, Empty. Those words precisely describe what many of us actually are while living – though we may appear otherwise simply because we are still breathing.

Apart from Christ, we are dead in trespasses and sins (Eph 2:1), spiritually dead and unresponsive to God. When people actually die, we come face-to-face with the physical reality of what it means to be dead. A dead body is cold, hard as leather and empty. The unique spirit that animated the personality is gone.

You can stand at a casket for hours, fiddling with buttons, adjusting ties, talking, shouting, weeping. (I’ve seen people actually kiss the dead.) You will get no response.

If the deceased was a believer in Jesus Christ, Christians believe that their spirit is “Absent from the body, present with the Lord.” (2 Corinthians 5:8) If they did not trust Christ, their spirit, being eternal, still lives on in some place of torment. (Consider the rich man and Lazarus)

I’m not a fan of viewing dead bodies. When I was a child, the departed were sometimes stretched out in their living rooms, where we’d join friends and family while dropping off a sweet potato pie or a bowl of home-made potato salad. Always seemed a little odd to me, eating and conversation with a dead body in the room.

Home viewings may have ended, even in Alabama where the old ways die hard. But the classic last look lives on. Sometime after the readings, tributes, songs and eulogy, family members typically file past the casket before it is finally shut and summarily rolled down the center aisle with prerequisite Scripture sentences: “I am the resurrection and the life…; I know that my redeemer lives…” .

Sadly, that last viewing is often where things turn dramatic. Sometimes the people who showed the least love during the deceased’s life weep inconsolably, require smelling salts to remain upright or have to be restrained from leaping into the casket.

Personally, I favor a closed casket funeral with lots of photos from various points in my life so those who knew me when, can recognize me then. As my mother used to say, “Remember me as I was.” Not cold, hard and empty, but full of life, laughter.

Of course, traditions die hard. When Mom passed away more than five years ago, family insisted on an open-casket send-off. And no, she did not look natural. She was wearing gloves, for heaven’s sake, which she never wore in life unless she was putting on a pair of Hanes!