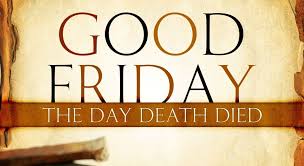 I woke up Good Friday morning thinking: What’s “good” about it?

After all, it’s the point in Holy Week when the hero dies.

Jesus is beaten, bloodied and finally nailed to a Roman cross. Crucifixion: an excruciatingly torturous form of public execution meant to deter criminal opposition to the state.

Jesus, who is innocent of wrongdoing, submits to this horrendous death. This is the same Jesus who healed blind men, lepers, paralytics and raised the dead, even Lazarus who had been in a tomb 4 days and had begun to stink!

Jesus’s followers were counting on Him to save the world. Instead, He hung on that cross until He died. Some onlookers remarked, “He saved others, but He cannot save Himself.” (Matthew 27:42)

It’s not the end of the story.

Good Friday presents Jesus, the baby in a manager in Bethlehem, fully grown and identified by John the Baptist as “the lamb of God who takes away the sin of the world” (John 1:29), actually becoming that atoning sacrifice. When Jesus says from the cross “It is finished” (John 19:30) it means something like: “Mission Accomplished.”

What was Jesus’s mission?

Scripture teaches that while the wages of sin is death, God’s gift is eternal life in Christ.  “The sting of death is sin; and the strength of death is the law. But thanks be to God! He gives us the victory through our Lord Jesus Christ.” (I Cor 15:56-57)

Good Friday is Jesus accepting the death penalty in our place. Those who accept His sacrifice on our behalf are completely forgiven. We receive life that never ends, restored fellowship with God, our creator. We are no longer slaves to sin or the fear of punishment that comes with it.

Hebrews 12:2 says of Jesus, “for the joy [of accomplishing the goal] set before Him endured the cross, disregarding the shame, and sat down at the right hand of the throne of God [revealing His deity, His authority, and the completion of His work].” (Amplified)

Holy Week builds to the cross of Good Friday after which things go quiet and still. Then comes Resurrection Sunday. Boom! Jesus gets up from the grave demonstrating that He is exactly who declares Himself to be: the resurrection and the life. (John 11:25)

Jesus Christ is the real deal. He took the worst punishment the world could dish out, and He conquered so that we can be more than conquerors. That is good news!

Since the children have flesh and blood, He too shared in their humanity so that by His death He might break the power of him who holds the power of death – that is, the devil – and free those who all their lives were held in slavery by their fear of death. (Hebrews 2:14-15)