Been thinking about some situations in which I find myself. Let’s call them relational difficulties that nev 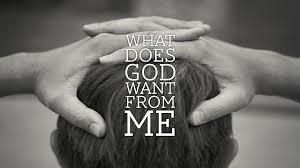 er seem to quite resolve themselves. Perennial problems that present me with immediate issues that must be faced and deep wells for future contemplation.

Most people have no problem articulating what they want. When I want something different, it’s easy to tell them where they’re wrong. In the midst of these tangled discourses, we seldom stop to ask: “What does God want?”

Does He want me to go along to get along, to keep the peace at any cost? If questioning is viewed as contrary, do I not ask questions that ought to be asked just so the other person isn’t made to feel uncomfortable?

It can be easy to say nothing. It’s possible to bully another person into silence. But can there be any real relationship if people can’t openly talk to each other about the hard stuff? If there is repeated disagreement over the same, unavoidable stuff maybe there needs to be a deeper conversation. Maybe a counselor would help.

Sadly, many of us avoid biblical counseling out of pride and self-sufficiency: “I don’t need that!” We’re quick to make a dental appointment if we have an unrelenting toothache. But we’ll suffer for years in a broken relationship refusing to seek help. Doesn’t a painful relationship warrant as much attention as an aching tooth?

It is possible to please – or placate – another human being. They get what they want – agreement, silence, control, whatever – but you are left to answer to God for a violation of conscience, for failing to do what you knew to be right simply because you were pressed by another human being. Have you ever been in that place: where someone is repeatedly behaving in a way or asking you to do something that is clearly wrong to you, but they won’t listen or they insist that your lack of cooperation is un-Christian? You want to talk but they keep saying you want to fight because you disagree?

In relational conflict between Christian believers, disagreements don’t usually involve black-and-white matters about which the Bible is clear. The issues tend to be more nuanced, where you have to apply biblical principle while taking into account our human tendency to do what is comfortable and to avoid dealing with our “stuff.” We are good at justifying ourselves; at conveniently excusing our personal issues while magnifying the other guys’ struggles.

So what does God require of His followers, of those of us who are learning to walk with Him in a world soaked in sin?

He has shown you, O man, what is good;
And what does the LORD require of you
But to do justly,
To love mercy,
And to walk humbly with your God?

God wants me to do the just thing. Not the expedient thing or the selfish thing. Show mercy. Where would we Christians be if God gave each of us what we deserve? Mercy is not deserved; I’m guilty, but mercy gives probation instead of jail time. Even though I committed a capital crime mercy commutes the death sentence to life imprisonment. Pride and self-assertion is our natural, carnal state. It always leads to a fall. The devil’s own rebellion began with a declaration of “I will…” God asks me to lay pride aside and to humble myself.

Being in relationship with people, Christian or not, tests my willingness to do what God requires. I struggle with it.

Doing justly may mean denying myself. I love mercy for me, but not necessarily for someone who hurts me. Once upon a time, before I really cared much about what God required, I went three years without speaking to a relative who wounded me deeply. I wanted them to feel my pain. God wasn’t in that, but I thought it was right. Humility doesn’t come easy, but it is rewarded. God opposes the proud but gives grace to the humble. And I need a lot of grace.

If you struggle in relationships as I do, join me in refocusing on what God requires. People will pull us in many directions. We all need to keep our eyes on Jesus. His word to every believer is the same one He gave to the early disciples who entered into relationship with Him: “Follow me.”

2 thoughts on “What God Wants”