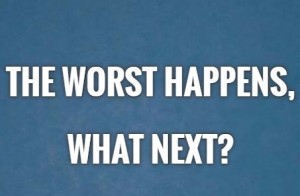 What if the worst does happen… then what?

Modern-day, western Christianity says if we really love God, if we have enough faith, we’re protected by a force field that nothing truly bad can penetrate. Should something terrible manage to get through, this fiction continues, we can pray it right out of our lives.

My real life experience has proven otherwise. Bad things happen. And sometimes the only way out is to walk through.

No matter how many crosses or garlic cloves actors use to ward off movie vampires and murderous mummies, in life there is no Christian talisman. The cross, after all, is synonymous with a torturous death that had to be endured before it could be overcome.

In this world you will have trouble. But take heart! I have overcome the world.(John 16:33b)

Should we encounter a nightmare scenario, it won’t mean that evil has won. Those who trust God may have to walk through the valley of the shadow of death, but Christ walks with us to the other side.

Our relationship with God doesn’t have to crack under the strain of hard things. It can survive and deepen. Job is the Old Testament example.

By God’s own testimony, Job was blameless. (Job 1:8) Yet, God allowed this guy’s life to fall apart without warning and without cause. (Job 2:3) In a single day, he lost his wealth, his children. On some other day, his health was attacked. There had been a “hedge” of protection around his life. (Job 1:10)  Clearly, for reasons that are inexplicable beyond His Sovereignty, God sometimes allows the enemy to get at us.

We know that Job kept faith, though he had so many questions. God brought him to a deeper understanding of Himself and restored Job without ever explaining why things happened as they did.

God still causes His people to triumph through tragedy.

In this Holy Week, when we Christians remember how Jesus Christ became our Savior, it’s worth noting that the captain of our salvation was made perfect through suffering, the very thing most of us spend a lifetime trying to avoid.

Christ “tasted death for every man” (Hebrews 2:9), a torturous, humiliating, excruciating death. Nobody dragged him to the cross. He went willingly, drinking to the last drop the worst the world had to offer. Three days later, He got up fully alive, overcoming the very thing that sought to overcome Him.

No matter what happens from now on, Jesus Christ has fully prepared those who trust in Him for what happens next. “No, in all these things, we are more than conquerors through Him who loved us.” (Romans 8:37)